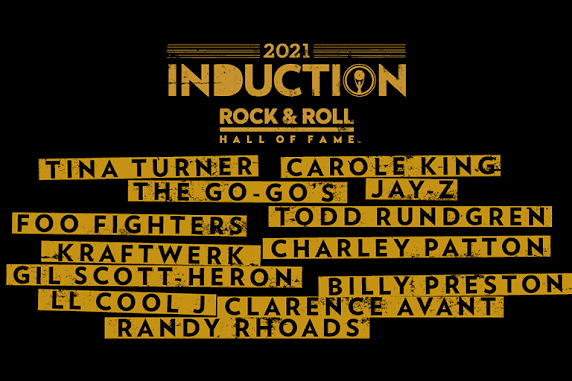 First things first, here are your induction class of 2021 (in alphabetical order)...

Foo Fighters, The Go-Go's, Jay-Z, LL Cool J, Carole King, Kraftwerk, Charley Patton, Billy Preston, Randy Rhoads, Todd Rundgren, Gil Scott-Heron, Tina Turner,
and Clarence Avant
Here in a little more detail is why the following artists are way, way overdue to join the Hall o' Rock...
KISS were first eligible in 1999 and waited 14 years. Kraftwerk waited 25 years!?!. And Abba got in before both of them!?! The Clash, U2, and Nirvana were rightly inducted their first year of eligibility. Sometimes it's obvious and sometimes it is down right head puzzling.

So after Nirvana’s first year eligibility induction and Pearl Jam in 2018, we are now entering the Grunge era of the early 1990’s. So before we start ringing in Soundgarden, Smashing Pumpkins, Alice In Chains, etc. etc., let’s just take stock and let them all wait a few years, ‘cause the Rock and Roll Hall o' Fame has some long over due catching up to do.

CHER / SONNY & CHER:
If Donna Summer and Madonna can get in, well... Cher is a lifer and let's be honest, has a much more credible early career than both of them. Starting out as a background singer for Phil Spector (yes she sang BG on "Be My Baby" and "You've Lost That Lovin Feeling"), through to her own classic Pop of the 60's, the 70's TV shows and on through the 80's and 90's hits. And it would be only fitting to induct Sonny as well, as a producer, song-writer ("The Beat Goes On" and "I Got You Babe") and the brains behind the act.

THE MONKEES:
The pre-Fab four might have been a couple of actors "playing" a band, but they really did tour. The Wrecking Crew played the instruments on their first few albums, but they did the same thing for The Beach Boys as well. Their music spans classic buble gum Pop (Daydream Believer) to Garage Rock classics (Stepping Stone).
1970’s:
MOTÖRHEAD:
A long shot I know but, It’s frickin’ Lemmy! It’s frickin’ Motörhead! Who rocks!?! You know the answer.

1980's:
JOY DIVISION/NEW ORDER:
Just as The Small Faces were coupled with The Faces when inducted, I believe it is proper to ackowledge both bands. I fear otherwise Joy Division might never get in, and surely desreve it.

DEVO:
The art rockers from Akron, Ohio have only become more relevant and influential over the years.
ALTERNATIVE:

THE SMITHS:
Nominated this year, they deserve it for cutting out a unique part of the sonic landscape that belongs to them and only them. Plus, you know Morrissey won’t show up but will write a funny, sarcastic, bitter, dismissive note to his ex-bandmates and everyone else involved. But it better be The Smiths before many others of the same era (just sayin').


PATSY CLINE:
One of the greatest singers of the 20th Century (period).