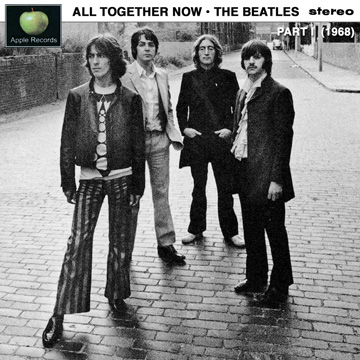 In this multi-part series, I will take a look at The Beatleʼs solo years, beginning with the creation of Apple Records in 1968.
Looking back there are some fun, trivial, forgotten, and surprising things about the post Beatlesʼ years. For example; did you know Lennon was the last Beatle to release a proper song based “solo” LP? And the last Beatle to have a number #1 single (Ringo had already had two, five if you include other countries!!). George was the first and the last Beatle to have a #1 single.
Even if you are a John, Paul, George, or Ringo fan, I bet there are songs you have never heard of. Plus, did you know that John & Yoko released LPʼs simultaneously? Where both albums were recorded at the same time with the same players. Or that every Lennon 45 has a Yoko B-side (except for when they were broken up)?

Solo albums from any active band are very telling. You can tell if they are a threat to the band or a true side-project; i.e. weird stuff they canʼt do within the confines of the group dynamic.

The Beatles' first solo albums really were very, very outside the band; experimental, World music soundtracks or one off 45ʼs. But once Paul McCartney released his first solo LP in 1970 (announcing the break up via his own self-written press release for the LP), it was off to the races and on to the charts.

Looking at their solo years in chronological order, you see how they were often reflecting each other, answering/responding to each other, pushing each other, and in some cases, inspired by the same events (i.e. the Troubles in Ireland). And how they all made appearances on Ringoʼs solo LPs.

So as a starting point, I'm starting with the year they launched their own record label, Apple Records – part of their umbrella company Apple Corp. (they always liked a good pun) – as it was the first ongoing venture where The Beatles were active with other artists (at least Paul and George were) and the first LP on the new Apple label was George Harrisonʼs score to the film, WONDERWALL.

So without further adieu, let me introduce to you, the men you've known for all these years...

January
George is in Bombay, India recording portions of his original score for the film WONDERWALL with Indian Classical musicians. George records a few instrumental tracks to bring back to The Beatles, "The Inner Light" backing track is recorded.

The Beatles open Apple Corp. offices on the fourth floor at 95 Wigmore Street in London (one year lease) only to discover that they canʼt play music (records) during the day. In July they buy another building. Apple continues to use both offices until the lease expires at Wigmore Street. 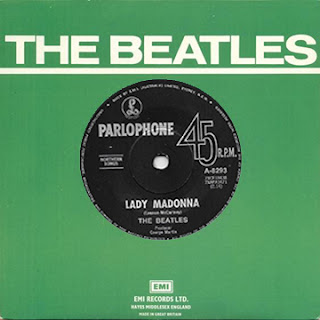 The single “Lady Madonna”/”The Inner Light” by The Beatles is released (the last under the Parlophone UK / Capital Records US labels).
Charts:  #4 US  /  #1 UK 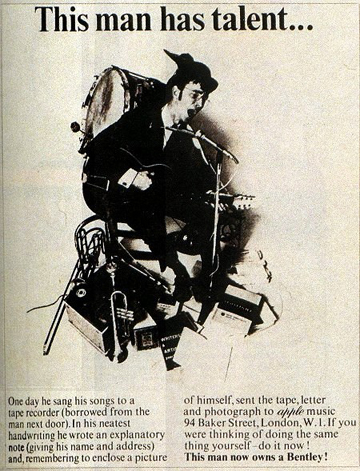 Click to view larger image.
May
Japanese-American artist Yoko Ono visits John at his home in Surrey while his wife Cynthia is away on holiday. They hang out, John plays her some of his far-out, weird, comedy, experimental tapes. She says, “Letʼs make one ourselves.” and they start recording (what turns into an all night session) trippy gobbledegook; making noises with tape loops and sundry sound effects, etc. And apparently made love for the first time when the sun came up. This would later be released as Johnʼs first solo LP, Two Virgins.

June
George is in the studio with Apple artist Jackie Lomax recording the single, “Sour Milk Sea”.
The Beatles purchase a five story building to be their new headquarters at 3 Saville Row in London. They build a studio in the basement and each Beatle has their own office.

The Beatles are working on their next album, The Beatles (The White Album). With The Beatles encouraged to contribute their own songs, contributions/ideas to fill out the two disc set. John records an avant-garde, sound collage with Yoko and George called "Revolution #9". This experiment becomes significant as it later inspires a) a crazed, Charles Manson to misinterpret that The Beatles are speaking to him directly about an upcoming race war (the furthest thing from John's mind), and b) the spoken word loop, "Number Nine" when played backwards is "Turn me on dead man" fuelling the, "Paul Is Dead" rumours the following year.
July
John & Yoko launch a joint art exhibition, You Are Here at the Robert Fraser Gallery in London. 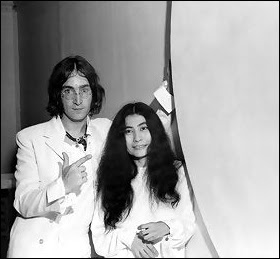 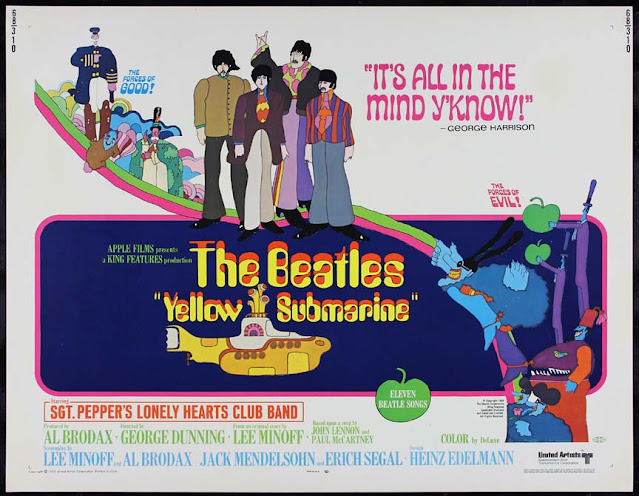 Cool footage from the premiere in London.

August
During recording of The Beatles (The White Album), Ringo quits The Beatles. Leaving London Ringo spends two weeks with Peter Sellers on his yacht in the Mediterranean. While there he gets inspired and writes the song, “Octopusʼ Garden”. Meanwhile, The Beatles continue recording, “Back In The U.S.S.R.” and “Dear Prudence” with Paul on drums. 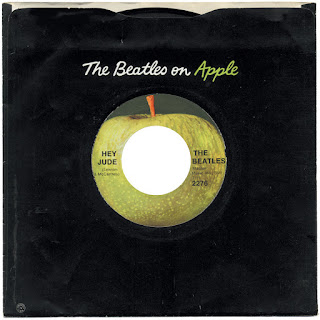 The Beatles launch their new label, Apple Records with the simultaneous release of four singles, including the double A-side single, “Hey Jude”/”Revolution”.
Charts:  #1 US  /  #1 UK – The BIGGEST selling single of the year!
"Hey Jude" is seven damn minutes long!! The average pop song is 2:50 and The Beatles do NOT provide a shorter Radio edit. And John's distorted guitar on "Revolution" prompts many record buyers to return the single complaining that there is a noise problem with the record.
The other Apple Records 45's are...
Mary Hopkinʼs debut single, the Paul produced, “Those Were The Days". An old Russian folk song which is recorded in five different languages (French, German, Spanish, Italian, & Afghanistan Farsi) and becomes a massive hit around the world.

Jackie Lomax single, “Sour Milk Sea” written and produced by George. The band is; George and Eric Clapton on guitar, Nicky Hopkins on piano, and Paul & Ringo on drum and bass.


...and the brass band, Black Dyke Mills Band, produced by Paul, with a new "McCartney & Lennon" (sic) instrumental, “Thingumybob" which was the TV theme tune to the London Weekend Television show of the same name. With their brass band version of "Yellow Submarine” as it's B-Side. Check em' out (they kinda' got lost in the success of the other three singles).

September
The Beatles send a telegram to Ringo asking him to come back. He returns to the studio to find his drum kit covered in flowers. They continue recording as a group again with “While My Guitar Gently Weeps”. George invites Eric Clapton to play the solo.

October
The Beatles (The White Album) now finished, The Beatles go their separate ways for a few weeks. Paul goes to New York to holiday with new girlfriend, Linda Eastman.

George is in the studio producing Apple artist Jackie Lomaxʼs debut LP, Is This What You Want?.

November
The first two Apple Records' Long Players are released.
Both are the first Beatles' solo LP's from John and George. 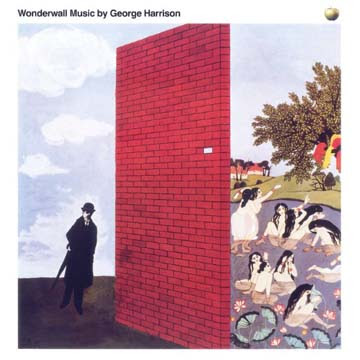 LP - GEORGE HARRISON & Band/Indian Orchestra - Wonderwall Music
Georgeʼs India/Ragga based original score for the cult film WONDERWALL. The film stars Jane Birken as Penny Lane and Jack MacGowen as Scientist Oscar Collins. The film is currently available for streaming online.
-
Charts: #49 US  /  Does not chart in UK
Have a taste or enjoy the full album audio here...
_______________________________________ 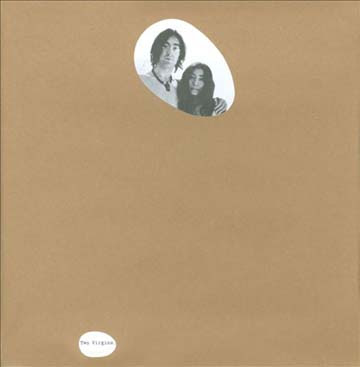 See how far you get listening to this one (NOTE: Yoko starts screaming at 4:30)…

Here is a (more listenable) psychedelic folk sixties answer/track called, “John You Went Too Far This Time" by Rainbo (AKA a young Sissy Spacek)... 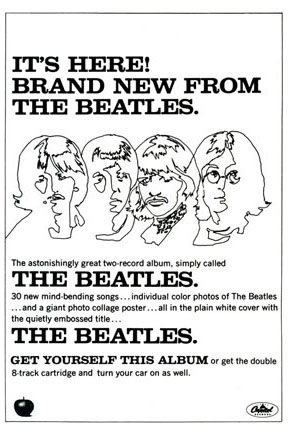 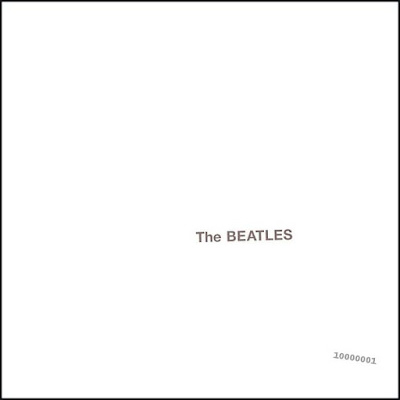 The Beatles (The White Album) by The Beatles is released.
Charts: #1 Around the World 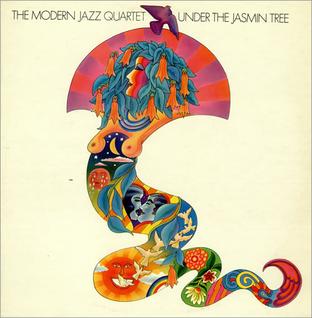 Apple Records releases the album, Under The Jasmin Tree by The Modern Jazz Quartet (with cool artwork by Alan Aldrich). The only Jazz artist on Apple. 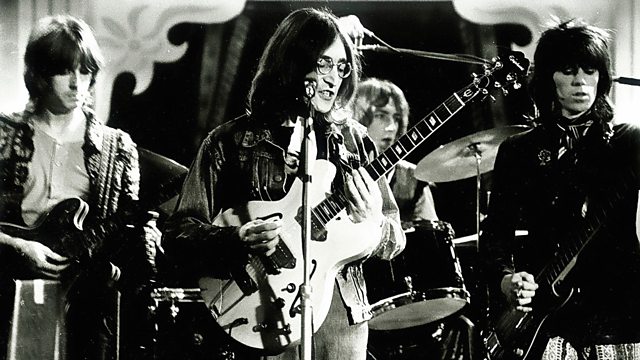 John appears on The Rolling Stonesʼ Rock ʻnʼ Roll Circus performing The Beatles' song, “Yer Blues” with Keith Richards on bass, Eric Clapton on guitar, and Mitch Mitchell from Jimi Hendrix Experience on drums. Due to The Who's performance being so great and The Rolling Stones (playing after 2AM) admittedly not in the best shape (especially Brian Jones), the film is shelved and never seen until 1996.

The Beatles, as they have always done since 1963, send out their annual, The Beatles' Fan Club Christmas 45. Interestingly influenced by John's sound experiments and Monty Python. Featuring an appearance from Tiny Tim singing, "Nowhere Man".

Since The Beatles are no longer a touring group, they kick off 1969 by jumping right back into recording another album, but their time will be divided between their outside projects and solo recordings.

After all is said and done,
It's only Rock 'n' Roll.