All Time is Now • The first Rock 'n' Roll song?

What was the first Rock 'n' Roll song? 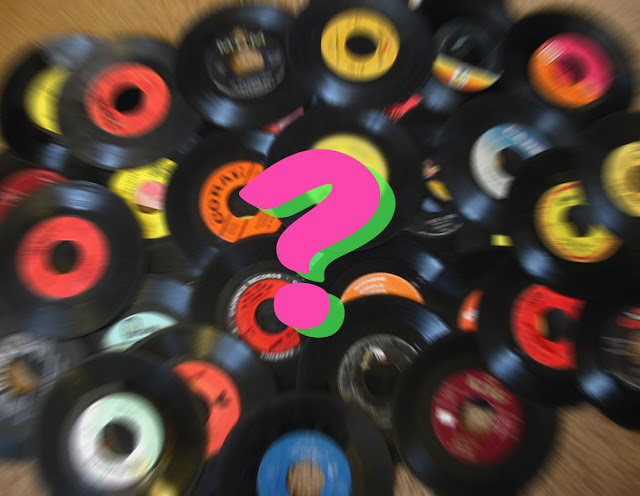 The history of Rock 'n' Roll music is full of brilliant mistakes; the goofs, the after thoughts, "Hell, we're just messin' around." and the unintended consequences of catching lightning in a bottle... by instinct and/or by accident.

What was the first?


There is a lot of debate about what is the first true Rock 'n' Roll recording. Is it Big Joe Turner's, "Shake, Rattle and Roll" in 1954 or Bill Haley and His Comets' version of "Shake, Rattle and Roll" later that same year (with a different arrangement and vibe). Some go back even further... Big "Mama" Thornton's original version of "Hound Dog" in 1953, or Fats Dominoe's "The Fat Man" in 1949, there's also the great Wynonie Harris', "Good Rockin' Tonight" in 1948 or Freddie Slack's "House of Blue Lights" in 1946. Or the often-sited, "Rocket 88" by Jackie Brenston and his Delta Cats (AKA Ike Turner and the Kings of Rhythm) in 1951. 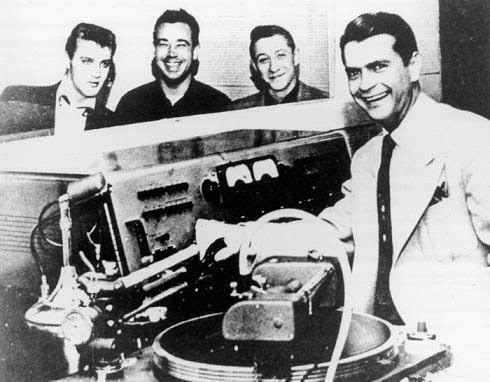 That's when it ALL came together.

And here's why; for me the exciting thing about the birth of Rock 'n' Roll is the mixture of genres and cultures, with opposites / polarities meeting, blending, mixing and smashing together in such a way that if one was to dissect it and try and look at each unique part... there would be no cracks that anyone could see, there are no seams, you cannot see the joins. The blend is flawless.

What went into it and what came out?
It is the Black and the White blending in harmony.

When I say, Black Culture, we all have some idea of what that is... musically speaking; Gospel, Blues, R&B, Soul, and on through the decades to Hip-Hop and Rap, etc. etc. Whatever you thought, would probably be right, It's a deep, deep culture.

And [if you'll indulge me for the purposes of this essay] if I say White Culture, (a term that likely has more of a socio-political impression than a musical one) one might be talking about, Sacred Hymns, Irish folk, Hillbilly music, Tin Pan Alley, or Country music and, Western (which actually used to refer to ballads from Western films!). There is a rich deep culture on both sides of the tracks.

The often mentioned, Ike Turner's "Rocket 88" is a record that rocks! No doubt about it, and is one of the most important revolutionary moments in recorded history, period.

Unfortunately, Ike Turner's legacy has now been boiled down to basically his cocaine-fueled beatings of Tina in the 1970's. But he was also a brilliant bandleader in the 50's, 60's and well into the 70's, influencing a whole generation of British rockers (The Beatles, The Stones, etc. etc. etc.) The former fact is always mentioned, while the latter is rarely mentioned, if at all.

"Rocket 88" is great, but it isn't all encompassing, it doesn't involve ALL music genres. And it doesn't have to, "Rocket 88" musically is very much rooted in the black Rhythm & Jump Blues of the 1940's and 50's. Its revolution is in the distorted rhythm guitar being forward in the mix. (distorted because legend has it, the amp fell off the car on route to the studio, causing the sound to be all dirty).

Ike himself said, in an interview with Holger Petersen published in his book TALKING MUSIC: Blues Radio and Roots Music...

I agree with Ike, the other early contenders I mentioned above were based very much in musical styles that contributed to Rock 'n' Roll, from Boogie Woogie to the jumped up post Big Band Blues and R&B of the 1940's. Elvis' version of "That's All Right, Mama" effortlessly seems to be everything at once, incorporating and blending at least six distinct musical genres or sub-genres.

Earlier, on that fateful day, July 5th at the SUN Session, Elvis is recording some Dean Martin ballads and Country songs. It's not exactly going that well. Nice kid, good voice, but nothing special at all. During a break, Elvis' picks up his guitar and is goofin' around playing a Hillbilly version of a Blues song by Arthur Crudup. The rest of the guys join in.
(For some context, here's the original from 1946)...

Sam Phillps is in the other room and hears this, comes back in the studio and says,


Sam says quickly, "Well, go back and do it again and I'll roll tape."


With the Black and with the White.


And Elvis isn't alone in all this. "Just messin' around" with him is Scotty Moore whose revolutionary guitar work can best be described as Jazz licks with a Country Twang.
And the rhythm?
Well those aren't drums that you hear (there was no drummer on the session). It is the pure rhythm engine of Bill Black, slappin' the double bass with some SUN studio slap-back delay on top. Playin' a jumped up Blues beat as if in a Hillbilly hoedown.

Upon listening to the playback of the song, bassist Bill Black said, "If anyone hears this, we'll be run out of town!" Only someone who lived in the South during the fifties fully knows what he meant by that. But there was no denying, this was something new, exciting, hell, this was different!

This moment is no doubt the birth of Rockabilly. But with any great Big Bang moment, it will shoot off into numerous directions... taking with it the tributaries of the past which now will be heard in a different way with different ears. The past led to this moment in time, and now the future will expand from this moment in time. Forward and backwards.

The next evening, the trio got together again to record a B-Side, after going over some songs, and again during a break, Bill Black, jokingly started playing Bill Monroe's "Blue Moon of Kentucky" singing in a high pitched voice impersonating Monroe. Elvis joins in singing in his own voice and lightning struck again. But this is from the opposite direction... where "That's All Right, Mama" was a Hillbilly version of a Blues song, this was a Jumped up R&B version of a Bluegrass song.
"We're just messin' around."
(For some context, here's the original from 1947)...

The first session wasn't a fluke, this again was something new! The boys recorded two versions, one slow and one fast. After listening to the playback of the fast one, Sam Phillips, exclaimed, "Fine, man! Hell, that's different. That's a Pop song now!"
Elvis didn't steal Black music, he loved it. Many radio stations actually thought that he was black when he released his first records. But Elvis wasn't strictly an R&B artist. The record company pushed his singles to Country Radio. He was being accepted and rejected by both sides. The blending and mix of all this "messin' around" is because of who Elvis was, a poor Southern white boy from the wrong side of the tracks. With a love of black Rhythm & Blues (BB King to Big "Mama" Thornton) and of white Hillbilly Country (Jimmy Rogers to Hank Snow) and an enthusiasm to share what he had found. 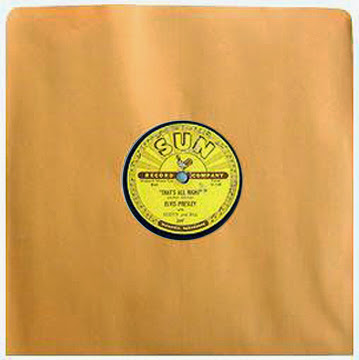 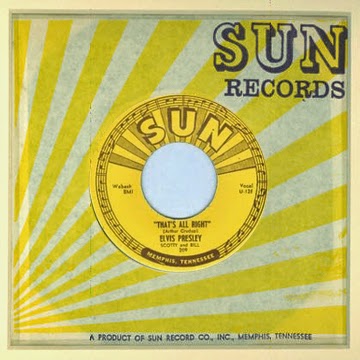 The Elvis' debut single, "That's All Right" by Elvis Presley, Scotty and Bill, came out on SUN Records (on 78rpm and 45rpm) on July 19th just two weeks after it was recorded. And by September, the B-Side, "Blue Moon of Kentucky" became the #1 radio hit in Memphis. Unfortunately due to a lack of national distribution it was just a regional hit, but it was the beginning of a new era that would change the world. And Elvis would get to record another single. 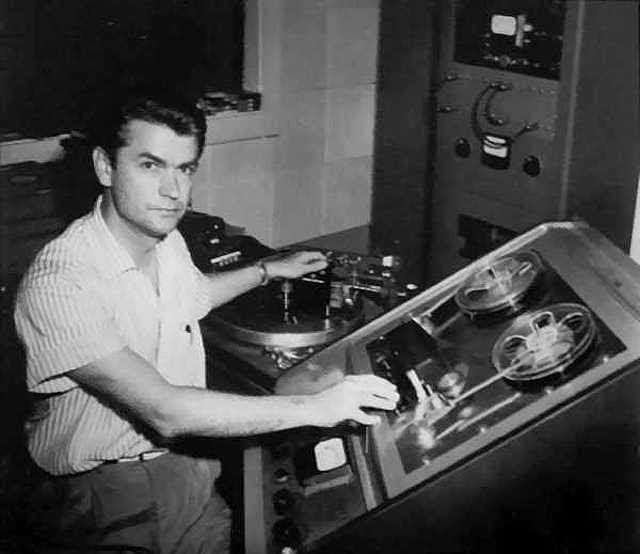 Back on July 5th 1954 everything changed, I'm just glad Sam Phillips was there to get it all down on tape.
But after all is said and done,
It's only Rock 'n' Roll.