The Birth of an International love affair.

This week, March 31st, in 1949 RCA Victor introduced the Fabulous 45 RPM vinyl phonograph.
The revolutionary vinyl single promised high fidelity and a new era in distortion free quality at 45 Revolutions Per Minute.
The 7″ 45 RPM record was a smaller, more durable and higher-fidelity replacement for the 10" 78 RPM shellac discs.

Some background regarding this brand new technology; "45" refers to its speed. The prior popular format, the 78 referred to its speed as well, spinning at 78 Revolutions Per Minute. The new smaller 7" discs also had a bigger hole (adapter available) so as to use the new multi-disc automatic changer player. You would pile up a number of discs on the thick spindle and each disc would drop one by one, to give you continuous listening pleasure. 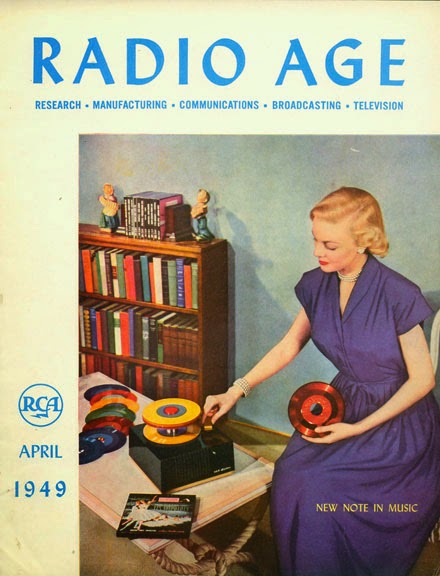 "The new life-long record, which is less than seven inches in diameter is made of durable, lightweight vinyl plastic and plays up to five minutes and twenty seconds on each side. The record player, which operates at 45 rpm, contains the fastest record-changing mechanism ever designed.  The excellent quality and clarity of tone of the new reproducing system has been highly praised by outstanding musicians."

Plus, the NEW discs didn't break like the 78's. Dropping a 78 on the floor will literally smash it to pieces. The new POLY vinyl discs could get scratched but they didn't shatter.
[Side note; Record Contracts to this day, still contain the outdated 10% breakage fee clause from the 1940s. Yes, 78s break, 45's not as much, CD's not much at all, and mp3's sure as hell don't break!]

Weeks prior to March 31st, retail record shops and department stores were shipped a player for demonstration and a batch of the new discs. They arrived in a custom envelope labeled: This Is Your Preview of the New RCA Victor 45 R.P.M. RECORD LINE! 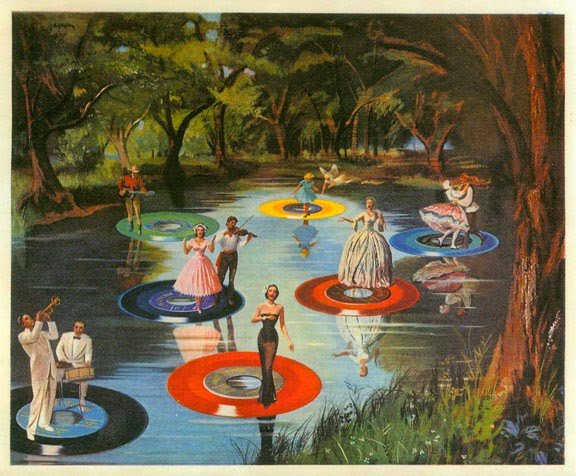 The colors and the first records (various samples) were...
Cerise (Orange) disc for Blues & Rhythm;
"That's All Right" by Big Boy Crudup

The preview envelope suggested: Use these seven records as samples between now and March 31st, and for use with the forthcoming window and counter displays. You may wish to hold them as collector's items — the first production run of a record that will set the pace for the entire industry!

Like any new technology it was a little expensive, as you needed a new player, so not everyone had one. The big cities on the coasts had plenty in the stores while in many parts of the middle of America it was just a rumour. But soon the costs of the player came down and more importantly the 45 discs didn't cost an arm and a leg.

At the time, much like a Photo Album, Record "Albums" were book bound multi-disc sets which held four 78s and RCA had the 45! You could stack up the discs on the fancy new player like so; Side 1/Side 8, Side 2/Side 7, Side 3/Side 6, Side 4/Side 5. Then flip the discs over and continue to listen in sequence.
[Side note; Record Albums are still called "Albums", as in, a collection of songs. It always bugged me when people said, "I guess you call them CD's now and not Album's right?!?" No.] 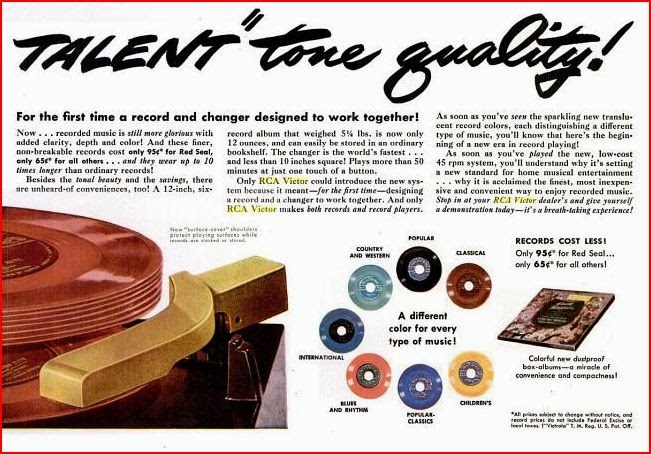 In 1948, Columbia had introduced a larger 12" micro-groove record spinning at 33 1/3RPM that could play for over 20 minutes a side. Yes, your favorite Classical piece or first half of a Broadway show without interruption. They were called LP's or Long Players.

Taking on the 78 was one thing, but this was different, and six months in, RCA was even considering abandoning the 45, but eight months later, by November of 1949, kids everywhere were lining up for the little disc at the low price at the new speed! By the end of the year, Capitol and M-G-M started pressing 45's as well, Mercury and Decca followed in 1950. And Columbia held out until late 1951 when RCA Victor started making 12" LP's as well. The new formats could, should and would co-exist.

By 1952 RCA was boasting of all-time record volume of sales with the new format, the new era had begun. Also, after 1952, all 45's were on black vinyl (they were the most durable). And a mere four years later, the first Rock 'n' Roll singles were released, kicking off a love affair with 45's that still exists to this day. By the mid 1950s the 45 had won the "War of The Speeds". In the US, 78's were gone by 1957. In Great Britain, EMI withdrew its last 78 RPM from its catalog in 1962. Some International countries like India would continue to make 78s up until the mid 1960s.

Some things never change though; any new format takes awhile to be adapted by every part of society. When the record companies announced they would start to phase out the 78 RPM format, they would however, for a while after that, continue making Hillbilly 78's. In the 1990s, Country music was the last to hang on with cassettes ("Heck, tha tape player in ma truck’s still workin’ just fine!"). In the next few years, we will see the same thing happen again when Compact Disc's start to get phased out ("Heck, tha CD player in ma truck’s still workin’ just fine!").

But the 45 was here to stay and would go on to be the medium of choice for decades, every generation of Rock 'n' Roll listenin' teenager on thru the Top 40 years of the 1960s, Classic AM hits of the 1970s and with New Wavers and Punkers (bringing back multi- colored discs), into the 80s, and 90s. Things looked a little shaky for the 45 at the turn of the century but as we see the Compact Disc era transition into the Digital & Cloud based wireless era, resurgence in vinyl is taking on a new life that doesn't look to be slowing down, but picking up steam. The 45 is alive and well. Long Live the 45!
There will be plenty of BRAND NEW special edition 45's available at this years' Record Store Day coming up on soon 2020.


Images are from the most excellent and informative Audio history website...
www.phonojack.com

Posted by DJ Shark Radio at 6:21 PM No comments: